Article: aquarium business claiming a 400% surge in demand since the COVID-19 pandemic began

Realtor.com: Check Out Just How Luxe a Fish Tank Can Look: An Aquarium Upgrade Guide for Grownups

"Odds are that you (or your kids) have owned a fishbowl or tiny tank, populated by a few guppies or goldfish that—up to a point—were fun to watch as they went around swimming in circles.

If you’ve ever longed, though, for one of those gorgeous, James Bond-villain-style aquariums teeming with exotic sea creatures, from jellyfish to sharks, we’re here to say that it’s entirely within your reach today, thanks to the rising tide of luxury aquariums for regular old homes.

Yup, home fish geeks are a thing, according to the New York Times, with the aquarium business claiming a 400% surge in demand since the COVID-19 pandemic began.

Some folks are splurging tens of thousands of dollars to install the type of watery paradise you might typically see in public zoos, spending as much as $750,000 on tanks weighing 75,000 pounds.

But if you’re thinking of diving into (or at least dipping a toe into) this trend, there are a few things you should know first. Here are a few factors to consider before you upgrade your fish tank, from amateur fun to a gorgeous centerpiece in your home.

How much does a fish tank cost? 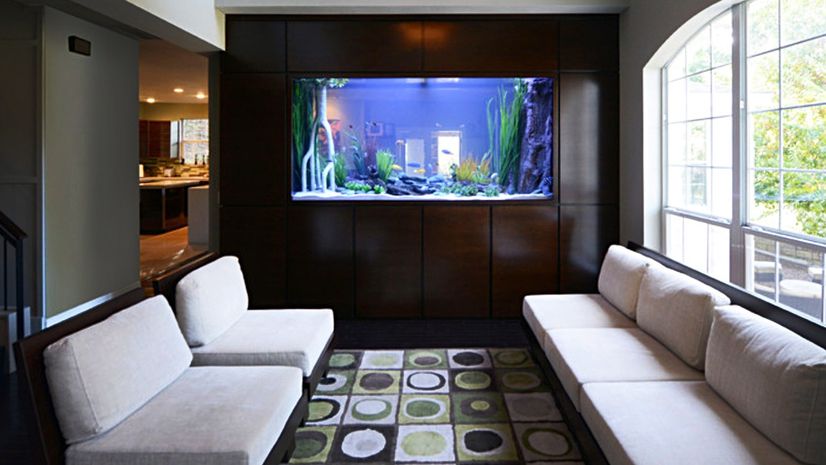 (Photo via Houzz by The Fish Gallery)

You can cheap out and get a modest freshwater tank for about $200, says Larry Liberstein, owner of Aquarius Aquariums. However, if you’re going for impact, you’ll want one of the big boys, which means “a large reef aquarium that could easily cost more than $10,000.”

Don’t forget the cost of the fish, some of which carry price tags in the hundreds of dollars.

Ordering a tank that’s in stock is cheaper than having one custom-installed, of course, and the materials you pick can raise the price, too. (Glass may be more affordable than acrylic, particularly if you pick a stock dimension, but going the custom route has similar costs.)

“There’s the price for standard glass, which is the material most tanks are made from, and then there are tanks made from low-iron glass, which has superior clarity but is at least double the cost,” explains Liberstein.

He says that when people see the floor model in his store and ask the price, their jaw drops.

“This is a labor of love, just like with any pet,” he says."

read on for full article